Now your remote broadcasts can be even easier and more foolproof! The new Sports Pod has Talkback so you can communicate with talent! And there’s Remote Mic Control….no more hollering “HEY BOB! Your mic’s not on!” Plus all the great features of the original Talent Pod…the new Henry Engineering Sports Pod has it all.

The Henry Engineering Sports Pod is an announcer’s mic/headphone controller and intercom system for use by talent at a remote broadcast. It is ideal for use at sporting events, on-location broadcasts, or in any studio. Sports Pod is similar to Henry Engineering’s Talent Pod, but with three additional features: an integrated intercom system, active mic audio on/off switching, and the ability to remotely control the mic. It solves the problem of providing talent with a mix Local and Return (IFB) headphone audio, and provides duplex off-air communication with a producer or engineer. Its simplicity allows for error-free use by non-technical users, and it provides an easy way to link several units for use at broadcasts with multiple announcers.

The Henry Engineering Sports Pod’s illuminated Mic On/Off button lets the announcer control his mic; the Cough button momentarily mutes mic audio. The mic can also be turned on/off via a remote pushbutton, with a Tally LED to remotely indicate when the mic is on. The Talkback button lets the talent to talk to an off-site producer or engineer. Pressing the Talkback button mutes mic audio from the main (air) output, and sends it to the Talkback output. When used with a Multi-Phones II Master unit, duplex off-air communication (intercom) is possible, allowing the producer to talk to the talent via the talent’s headphone audio.

The Sports Pod also provides control of the announcer’s headphone audio, allowing remote-site Local audio to be mixed with the Return audio that’s sent to the site from the main studio. There are separate inputs for Local and Return audio with a volume control for each source, so the talent can adjust the mix in his headphones. To minimize confusion between the two, Sports Pod’s two Pan switches can independently position Local and Return audio in the Left, Center, or Right channel of the announcer’s headphones. The LOCal button, on rear, allows monitoring the mic via the Local headphone input if there is no source of Local headphone audio. For studio installations, the Stereo mode will enable both headphone channels to be controlled by the Local volume control.

Sports Pods can be powered with an external wall transformer; one transformer will power several units linked with cat5 cables. If used with a MultiPhones Master unit or SixMix USB Console, the transformer is not required. Talent Pod is 1/3 rack width, and can be rack mounted using the optional Rack Shelf. It can also be mounted using the Desk Mount or the wall/cabinet mounting brackets. 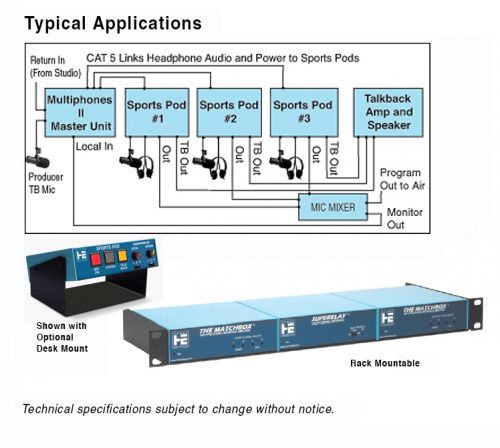